Banning the EDL is ineffective, counter-productive and demobilising 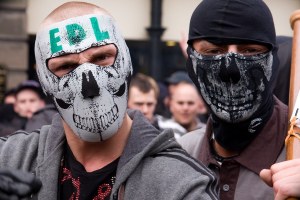 [I wrote this article for an internal SWP publication in October 2010 arguing against the tactic of calling for state bans against fascist organisations. I thought I’d dig it out and republish it in the light of current events. At the time of writing the EDL are still intent on rallying in Tower Hamlets this Saturday, and anti-racists still intend to turn out on the streets to oppose them.]

Anti-fascist strategy and tactics are a constant focus of debate for the left, and rightly so. Different political traditions have different analyses of the far right and different approaches to tackling them. But at the same time there is a palpable desire among broad layers of the working class for unity against the Nazis.

This is why, even when anti-fascist groups vehemently disagree on tactics to the extent that unity in action is impossible, there is often an unspoken agreement that each group pursue its own course without making public attacks on the efforts of others.

The widespread acceptance of this tacit truce is one reason why so many on the left have been shocked by the recent conduct of the Hope Not Hate campaign run by Searchlight, the anti-fascist magazine. First in Bradford, and then again in Leicester, Searchlight has actively attempted to dissuade people from attending counter demonstrations against the EDL. Instead, it proposed an anti-fascist strategy that relies exclusively on appeals to the state authorities for a ban on the EDL protest.

Nick Lowles, Searchlight’s editor and chief ideologue, wrote prior to the EDL’s Bradford rally: “We are putting all our efforts into stopping the EDL protest taking place at all… A delegation of leading Bradford figures is going to see the Home Secretary and a legal case is being drawn up to challenge the EDL’s right to protest. This, in our view, is our only option and sole focus.” Counter demonstrations against the EDL – in fact, any alternative anti-fascist tactic that risked confrontation or controversy – should be actively discouraged lest they interfere with the project of marshalling the “hearts and minds of local people” behind calls for a state ban.

This article argues against the Searchlight strategy on three grounds. First, I argue that the state cannot be relied upon to effectively contain racist and fascist groups: bans don’t work. Second, I argue that such appeals to the state can easily slip into calls to strengthen the state’s repressive apparatus – an apparatus that is routinely deployed against the workers’ movement. Third, and most importantly, I argue that Searchlight’s calls for a state ban necessarily go hand-in-hand with a concerted effort to demobilise and disarm the movement – not just the anti-fascist movement, but the working class more generally.

That is why Searchlight’s current trajectory is not merely misguided. It is dangerous, and it needs to be challenged vigorously and robustly across the working class movement.

Despite all the hype about bans from the home secretary, in both Bradford and Leicester the EDL protests went ahead as so-called “static” demos. All that was banned were proposed marches that the EDL had applied for permission to hold.

In fact, the banning orders made no specific reference to the EDL, instead banning all marches in the city – including any anti-racist ones. So the EDL got to hold their static demos as they had done on every other occasion, including Stoke-on-Trent where they ran riot. In fact, it is common practice for the police to “escort” the EDL to their assembly point – thus creating a de facto march even when the protest is officially a static one.

Moreover, once the EDL has assembled for its rally, police efforts to contain them have been patchy to say the least. On almost every occasion groups of EDL have broken out of their pen and attempted to go on the rampage – in Stoke, Dudley, Bradford and Leicester.

Anti-fascists, in contrast, are policed far more vigorously. In Bolton and Leicester the police went out of their way to prevent Asian youths from joining the Unite Against Fascism counter demo. In terms of their public statements, the police typically pay lip service to being “neutral”. Yet in practice they routinely endorse the EDL’s ridiculous claims to be “peacefully protesting against militant Islam” while smearing anti-fascists as “the real troublemakers”.

None of this should be remotely surprising to anyone versed in the history of anti-fascist and anti-racist struggles. From Cable Street in the 1930s to the present day, the police have always been keen to “facilitate” the fascists and reluctant to crack down on them. The police force’s deep seated and ineradicable racism – at times blending into sympathy and even outright collusion with the far right – means they cannot be relied upon to check the growth of fascists. The same analysis applies to state bans against racists and fascists more generally. Their enforcement is lacklustre and their effectiveness minimal.

Many people recognise the weaknesses of state bans as outlined above. Even Searchlight were forced to admit this on the day of the Bradford demonstration. Lowles wrote: “800-1,000 EDL came into Bradford, acted appallingly and largely got away with it. They chanted disgusting anti-Muslim abuse, threw bottles and other missiles whenever they could, repeatedly attacked the police lines and then, when a group did break out, were able to run around the city without being picked up. The police were soft on the EDL and this only encouraged them to get even more rowdy and obnoxious.”

Searchlight did not seem to let these observations get in the way of continuing with their strategy of talking up bans and opposing counter demonstrations. But others on the left have reacted by calling for the state’s powers to be beefed up in order to enable effective bans on the EDL’s “static” protests.

While this position is more consistent than Searchlight’s, it is not one that revolutionaries can endorse. The past two decades have seen a huge increase in the powers, equipment and resources available to the police for “public order” purposes.

In particular, the “war on terror” has been used as an excuse to clamp down on civil liberties and ramp up the repressive powers of the police. This has led to brutal police methods being routinely deployed against left wing protesters – the Unite Against Fascism counter demo in Bolton and last year’s G20 protests in the City being particularly glaring examples. We should be calling for these powers to be dismantled, not strengthened.

Moreover, when legislation is passed giving the state powers to control protests, it is invariably framed in terms of “public order” rather than being deployed against racist or fascist groups. These supposedly “neutral” formulations are then used to crack down on the left and the right, or on the left rather than the right.

We can see this logic at work in the bans on marches mentioned earlier. We can also see it in historical examples. The 1936 Public Order Act banned political uniforms and required police consent for political marches – measures ostensibly directed against the Blackshirts. In practice these measures were deployed primarily against the left, striking workers and Irish Republicans. We can expect an identical pattern today.

But there is a deeper problem with the strategy of calling for state bans, above and beyond the documented ineffectiveness of such tactics and the risks of strengthening the state’s repressive apparatus.

The problem lies in the very gesture of appealing to the authorities to “do something”, rather than looking to our class’s own power. Capitalist society tries to structure our lives as powerless individuals, and capitalist ideology encourages us to think of ourselves as powerless individuals. Revolutionaries face a constant uphill struggle to counter these processes and instil collective self-confidence into the working class.

This is why the “common sense” position adopted by much of the left – that of supporting both counter demos and state bans – is problematic. In practice, the first of these works to mobilise a mass movement, while the second demobilises it. That is why those who formally adopt the “common sense” position in practice always tip one way or the other.

Searchlight’s latest policy shift moves from implicit to explicit demobilisation. They are now openly trying to dissuade people from attending counter demonstrations and undermine those who attempt to organise such protests. And Searchlight’s allies in Bradford and Leicester have gone further, branding anti-fascist counter demonstrators as an equivalent threat to the EDL.

The administrator of Hope Not Hate’s Facebook page for Bradford sent out a message on the eve of the demo declaring that “the UAF are just as dangerous” as the EDL. In Leicester, a councillor working with Hope Not Hate told the local paper: “People will have heard about the EDL’s plans to protest in Leicester on Saturday, and about the counter-protest planned by UAF. There is nothing we can do to prevent these demonstrations, but what we can do is to make it clear that any organisation that promotes hatred and fear is not welcome here.”

In fact Searchlight has for some time now been arguing against any anti-fascist tactic that involves mobilising large numbers of people. It opposes anti-racist music carnivals, claiming that such activity “drains and diverts activism away from local campaigning”. It opposes “rallies, marches and pickets” against the fascists on similar grounds – they are, allegedly, “a distraction from the real work required in the communities”. The nature of this “real work” is never very clear. In Bradford it involved getting people to sign a statement against the EDL that did not even mention the word “racism”.

But as the October 2010 issue of Searchlight makes clear, this strategy of demobilisation is not intended to be restricted to anti-fascism. Nick Lowles and Paul Meszaros write: “This debate over strategy reflects a wider debate in the trade union movement over direction and tactics. At the TUC conference there were clear lines of disagreement between those who preferred a strike-based approach to opposing the cuts and those who believed the focus needed to be on winning the hearts and minds of union members and then taking the campaign out into the community.” The tactics being used by Searchlight to demobilise anti-fascist activism are a test case. The intention is to use the same tactics to choke off militant action against cuts and job losses. “Winning hearts and minds” in a nebulous “community” becomes the excuse for scuppering strike action by actual workers.

This strategy of demobilising people in the face of the fascist right would be worrying enough at the best of times. Given the current context of dark clouds gathering it is positively dangerous. We are witnessing an upsurge in anti-immigrant sentiment and unprecedented levels paranoid hostility towards Muslims not just here in Britain but across the Western world.

All this takes place in the context of cuts and austerity measures that risk plunging us into a 1930s style depression. And we know exactly what a similar conjuncture produced in the 1930s: the triumph of fascism in Germany, six years of savage world war, and the near extermination of Europe’s Jewish population.

Our urgent task is to create an anti-fascist, anti-racist mass movement that can head off the EDL and BNP while feeding into and strengthening wider working class struggles. Challenging and defeating these dismal calls for demobilisation will be an integral part of that task.